Recently, I’ve been spending more time in the Catskill Mountains of southeastern New York State. It’s the closest drive I can think of that will get me to a mountainous region with a 3,000+ foot elevation. I would imagine that folks from the upper west coast would chuckle at that number. Well, these mountains may not be as tall as the ones out west, but they have their own unique beauty and vibe. According to geologists, these mountains are a result of uplift and erosion. The process that formed these mountains is different from the process that formed most other mountains, which involves folding, extensive faulting, magmatic activity, and other events that can be described as orogenic events. Today, the Catskills are described less as a mountain range, and more as a severely eroded plateau resulting in a sharp relief (Catskills GIS Atlas 2012).

To me, a mountain is anything that has dirt, rocks, plants, and an incline. Places like that tend to have “vibes”. I’m going to forget the fact that the area is crammed with resorts and that it is mostly known as the place where many young stand up comedians got their start. I drew my own take on these mountains as it hit me while camping there and hiking through the area. I cannot define that vibe in a word because I had many different experiences there.

We once camped at Mongaup Pond: a beautiful campground on a lake. We filled the raft with air and lowered it into the water. We paddled through the water and a bald eagle nervously floated from tree to nearby tree as if he were always uncomfortable. As soon as I opened a Victory Pils he was gone. Some time later, a golden eagle circled the lake over and over again. I don’t think he found what he was looking for. Some time even later: Witches (I think?). Into the night…awakened inside the tent by strange lights on the outside. In the morning, we tried to place the sounds we heard that night, but we could not tell what they were without adding imagination. What was the vibe….?

Back to our favorite campground: Woodland Valley Campground. The vibe is always really good here. No enchanted lake or breathtaking views, just a quiet place amidst oaks and other hardwood trees that I can’t really identify. The main attraction photo describing this place in the brochure was a photo of a leaf. The man working the visitor’s booth closely resembled Keanu Reeves. He didn’t talk much about surfing, but he had great tips for reserving campsites: “Just ummm pull it up on the website man, click reserve, and you’re golden, bra”. Nights here consisted of craft brews, lanterns, interesting humor, stars, hammock time, little mice on Harley’s, and the sound of the owls (if you are lucky).

While hiking; the air always smelled great (unless something crapped nearby). The climbs were challenging, rocky, and refreshing. Once at the top, sometimes you’d see peaks of similar size; cobalt and cerulean blue in the distance. Other times, you’d see hazy bodies of water down below or nothing but thick fog. In the woods, something was always scurrying around and rustling up the leaves. Now and then you’d feel a presence of something and then nothing. Suddenly, a bird of prey would leave in haste crashing through the trees, cursing you for discovering its hiding spot. You’d wait for your heart to slow down and then take some water from the stream.

What about the people? Not my favorite subject. What was the vibe in the Catskills? I’m not sure I’ve got it yet, but I’m excited to go there again. 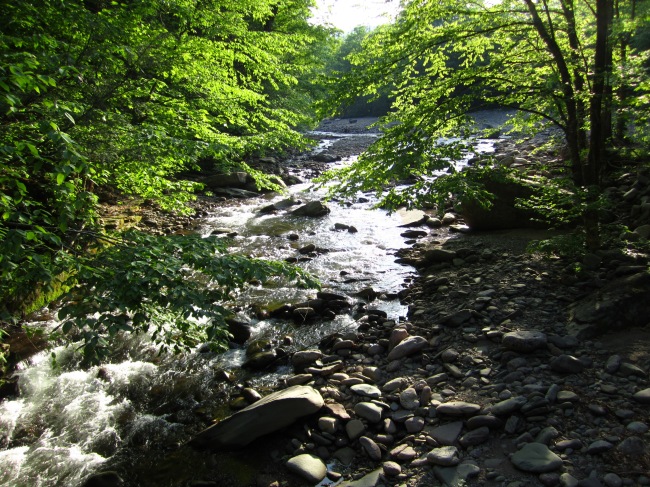