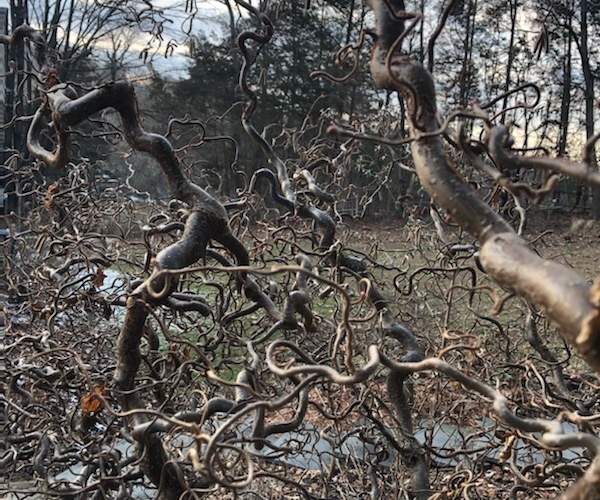 As luck would have it, the former owner of our new home is a dirt digging, hose wielding, wheel-barrow commanding, gardener! A good fellow, for those reasons. As a result, the garden beds are already made, layers of mulch are already decaying, and a newly inherited compost bin awaits! But there is also a big disadvantage – you inherit plants you’re not crazy about (and disposing of them, if no one else wants them, is a drag). Imagine being surrounded by an army of Miscanthus ornamental grasses when you subscribe to ideas from books like “Bringing Nature Home” by Doug Tallamy.

I should point out that, without an 8-foot fence, the plant palate here is limited thanks to a cute, but extremely over-abundant, 3-foot tall, plant-eating-machine called…white-tailed deer. Surely, you too have nightmares about this creature, as you recall getting out of bed, peering out the window, and shrieking wildly in despair at the sight of what remains of your precious flower garden. For this reason, I completely understand why the entire property is decorated with Japanese Barberry (Berberis thunbergii), Butterfly Bush (Buddleja spp.), Japanese Spirea (Spiraea japoniza), and Miscanthus grasses. These plants are easy to find in commercial nurseries and they are the last resort for deer.

But, I’m not a purist either when it comes to natives. I’m a sucker for blooming Crocus, Daffodils, and Tulips when most other plants are still dormant. There are few things more comforting and inspiring than the sights of Star Magnolia (Magnolia stellate) and other ornamental magnolia blooming in early spring. Among all the inherited ornamentals, I found a new mysterious plant I knew nothing about. Its speckled and contorted branches turned and twisted in odd and interesting ways. I could not resist investigating further.

The more I looked, the more familiar the plant became. I noticed catkins, which were very similar to catkins found on the Betula (birch) genus. The leaves now started to look familiar too; much like that of American Hazelnut (Corylus Americana) but larger and rounder. Finally, I was convinced that it was some sort of Hazelnut hybrid. Turns out; it is a Hazelnut cultivar commonly referred to as Contorted Filbert, Corkscrew Hazel, or Harry Lauder’s Walking Stick.

The plant’s Latin name is Corylus avellana and it is originally from Europe and western Asia, but according to online sources, the contorted variety was derived from a shrub found in the UK and named after a famous entertainer from Scotland. I do not mind this shrub at all and I am enjoying the winter interest it offers with its weird twisting branches. Soon we will find out if this shrub will produce Hazelnuts, but I will be surprised if it does. I am realizing that sometimes to gain a certain aesthetic appeal, a cultivar is a necessity that I can learn to embrace if most of the plants in my yard bring value to wildlife (especially native insects) in the form of food and reproduction.