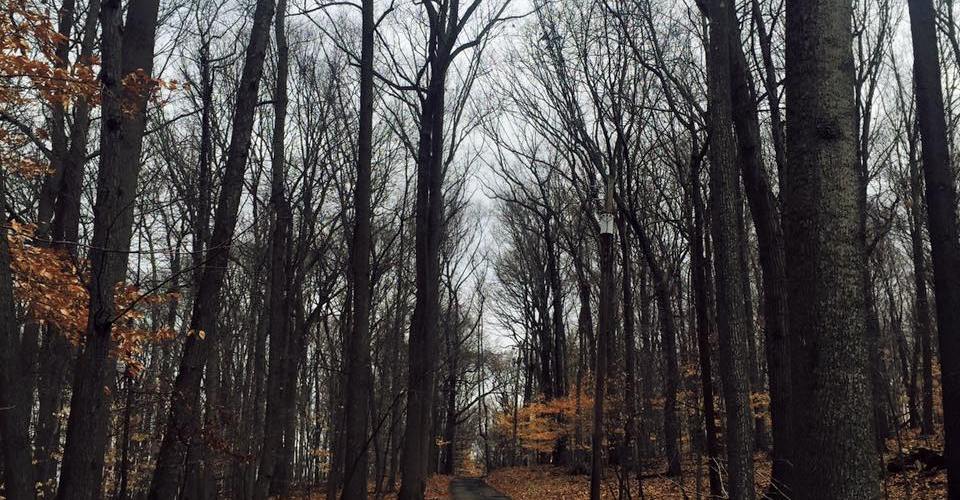 Weather is strange in the mid-Atlantic region these days. December felt like a very warm October and today little Mine Brook filled into a raging river thanks to a long period of rain. Being outdoors in the rain can be fun too, but I decided to make progress on a new watercolor landscape instead (teaser shown above). The painting is a reminder that seasonably cold days are ahead!

A few hours later, I felt the urge to get outside – a.s.a.p.! It drizzled on steadily, but rays of sunlight were beginning to peak through the heavy gray blue purple clouds. I needed to run so that I may drink delicious craft beer later. When I hit the road the sun started to overpower the clouds, but the rain kept falling in the now luminous afternoon.

The sun was now behind me as I ran up the hill. I was at the perfect place at the perfect time – in the presence of a meteorological phenomenon. The Hokus Pokus know as reflection, refraction, and dispersion gave birth to an amazing double-rainbow! It was the most vivid rainbow I had ever seen and I ran around grinning up at the sky, of course.

The rain had finally stopped. The air smelled of great sweetness with a hint of clean cotton, grassy freshness, wet earth, and smoke from wood, burning somewhere not far away. It was heaven on earth, but the sun was now sinking below the trees in the distance. It would soon be over and I started to run toward home.

A dozen Black Vultures (Coragyps atratus) circled up above, searching the landscape. A half a dozen more of them were all perched in one tree. Edward Abbey wrote that vultures are philosophical birds, though he was referring to the Turkey Vulture (Cathartes aura). Abbey’s vulture thinks: “where there is life, there is death”. I think: what a day to be alive!

I pushed the car door opened and stepped into the soupy stinky abyss. I don’t remember it ever being this bad. Am I just crotchety in my old age of 30 or is something just not right anymore with our climate? I prefer to think the latter. I tend to agree with all the “maniacs” that think “the fall” is coming (and I don’t mean autumn). The humidity was so thick you could chew it. I crawled toward my apartment door like a snail dragging my bag, knuckles, and testicles across the pavement.

Lo and behold I reached the front door to find out that it was even worse upstairs in the apartment than it was outside, if that was even possible. Of course my honey and I ripped the AC out of the window a few days ago, it being mid September and all; we thought that only cool crisp weather awaited us now. BULL SHIT!!! Dante’s Inferno was more like it.

There was only one thing left to do; run. If I was going to die of heat exhaustion, then so be it. Better than dying while staring at an excel spreadsheet. I started off with a peculiar trot; head way out in front, arms dangling, legs kicking way out back. I looked like a puppet if it were being handled by a sloth.

After I got done with bobbing around and got into a decent rhythm I glanced up at the sky and I knew this was going to be EPIC! Ominous dark purple-gray-blue stuff slowly gathered and gathered and gathered until a yellow-pink-neon line danced down into a far off hill and some trees. Then, another one and another one and then nothing, but darkness approaching. The heat and humidity was so intense at this point it was literally filling up my throat. I was beginning to think that nothing was to become of these dark clouds when finally it happened; sweet release.

At first, the droplets came in increments as if they were teasing me. A few minutes later I heard a hissing behind me and it made me run faster. I started grinning like an idiot as the rain came over me like a shower with really good pressure that you’d only find at expensive hotels. The wind bent the trees in any direction it pleased and acorns landed forcefully across the land and a few bounced off my head. A red fox jumped out of the woods and onto the road. It took off straight ahead way faster than I could hope to keep up with it. The run was over and the rain had stopped. I was drenched, tired, and very happy. It was time to stick that damn AC back into the window and live another day.