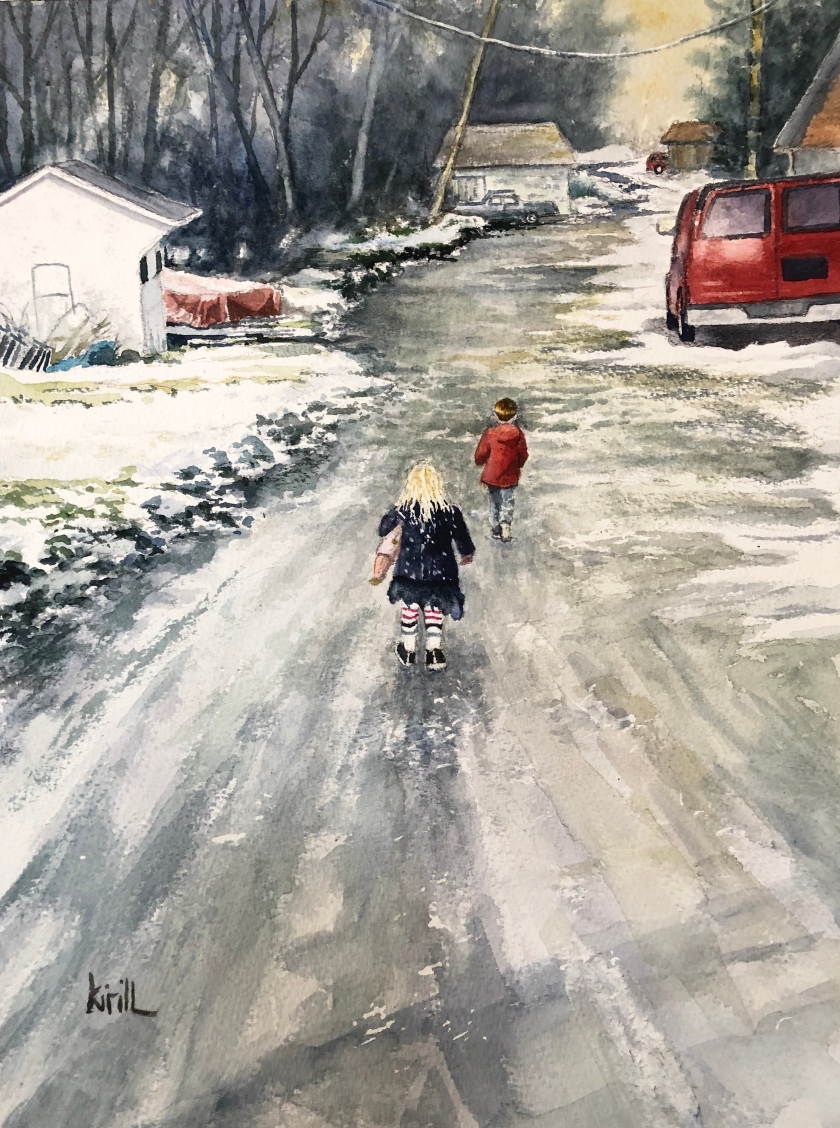 Sometimes inspiration comes from a photo taken by your sister-in-law. I’m not sure what about the photo inspired me, but for some reason I just wanted to paint it. It’s great to see kids playing outside. The cold northeastern weather doesn’t seem to bother them. They are happy and curious exploring the streets of East Stroudsburg, Pennsylvania with their parents.

Weather is strange in the mid-Atlantic region these days. December felt like a very warm October and today little Mine Brook filled into a raging river thanks to a long period of rain. Being outdoors in the rain can be fun too, but I decided to make progress on a new watercolor landscape instead (teaser shown above). The painting is a reminder that seasonably cold days are ahead!

A few hours later, I felt the urge to get outside – a.s.a.p.! It drizzled on steadily, but rays of sunlight were beginning to peak through the heavy gray blue purple clouds. I needed to run so that I may drink delicious craft beer later. When I hit the road the sun started to overpower the clouds, but the rain kept falling in the now luminous afternoon.

The sun was now behind me as I ran up the hill. I was at the perfect place at the perfect time – in the presence of a meteorological phenomenon. The Hokus Pokus know as reflection, refraction, and dispersion gave birth to an amazing double-rainbow! It was the most vivid rainbow I had ever seen and I ran around grinning up at the sky, of course.

The rain had finally stopped. The air smelled of great sweetness with a hint of clean cotton, grassy freshness, wet earth, and smoke from wood, burning somewhere not far away. It was heaven on earth, but the sun was now sinking below the trees in the distance. It would soon be over and I started to run toward home.

A dozen Black Vultures (Coragyps atratus) circled up above, searching the landscape. A half a dozen more of them were all perched in one tree. Edward Abbey wrote that vultures are philosophical birds, though he was referring to the Turkey Vulture (Cathartes aura). Abbey’s vulture thinks: “where there is life, there is death”. I think: what a day to be alive!

Lately, I’ve been doing a few solo-hikes. Not my favorite but, desperate times call for desperate measures. The leaves are gone and it’s cold as a witch’s teat (whatever that means). So it’s hard to get ordinary people to join me on a hike this time of year.

END_OF_DOCUMENT_TOKEN_TO_BE_REPLACED

Located in Chester, NJ this hike will take you along the black river, on trails, farm roads, and carriage roads. This place has a ton of history. You can almost smell the bread and cornmeal when you visit the Cooper Mill, found at the beginning (or end) of the hike.